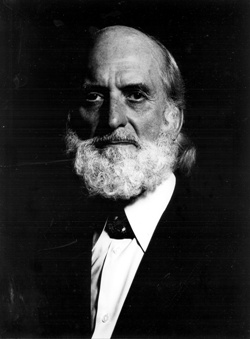 Professor Jeremi Wasiutyński was a son of a Poland lost. He was one of the last representatives of the Polish nobility, its culture, manners and heritage that have perished with History’s brown and red fires. Born and educated in Poland he treated the privileges of his family status, upbringing and culture with the deep sense of responsibility, hard work and independence of mind. “Noblesse oblige” found but few followers like Jeremi Wasiutyński.

He was certainly in sincere debt to Norway for what the country offered to him. He was certainly grateful to have found here loyal and loving friends and invaluable associates. He loved Norway’s nature and culture.

His intellect and creative works certainly belong to European treasures of Renaissance, modern humanism and sciences.

But when one met him – and I have had this fortunate privilege – one immediately felt the sense of being with a proud and old-fashioned Polish gentleman, an exceptional figure from another land and another epoch. He certainly testified to the best qualities of this bygone realm, which now can only be found in the music of his favourite Chopin, in the old portraits of his severe forefathers, and especially in belle-lettres.

I am told that a beloved piece of literature to which Professor Wasiutyński used to return in the moments of nostalgia and sadness was an epic poem, Pan Tadeusz, by our great Romantic poet Adam Mickiewicz, written in 1834. It is a moving tale about the life of provincial Polish gentry. The poet himself regarded this work as an island to escape from “European noise”.
Prof. Wasiutyński's favourite escape was a chapter called “Diplomacy and Hunting”, with its famous description of a horn music played to start a hunting party. It is a lovely poetic piece combining the images of music, the surrounding forest and hunting customs. It ends with the well-known refrain about the performance being stopped but the sound of music being still heard as an echo.

In memory of professor Jeremi Wasiutyński, and those he had left in the land of his real and imagined past, let me read a passage from the poem – the homeland of his ever present memory.